You tried to debug a { | type|script in Chrome browser and it does not fire a breakpoint.

You have already made sure that JetBrain extension is installed in Chrome and configured right.

There is one more missing piece to this puzzle. You need to map the URL for where the scripts come from. This is clearly documented in the IntelliJ documentation, but nevertheless, it is not intuitive enough that it took a while for me to find out.

The key is that you need to type in the Remote URL in the Remote URL list. This is NOT OPTIONAL for Play users. If you are running the "out of the box" configuration of Play framework, and putting in your * under the "public" directory somewhere, then all you need to do is to just type in /assets (will become http://assets after you save it without any ill effect) where the public folder is in the list. Save it and any JavaScript or Typescript (with a map) can be debugged. 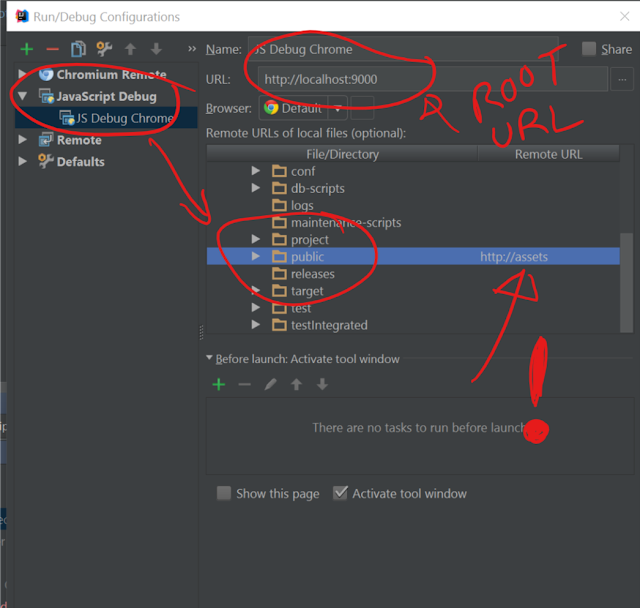 Posted by Unknown at 7:48 AM No comments:

I have upgraded my Windows OS to Windows 10 Anniversary edition recently and right after doing that I started to get the following error when connecting to the VPN. I have downloaded the same VPN client.

A certificate chain processed, but terminated in a root certificate which is not trusted by the trust provider.

Yes, we know your  were going fine until a moment ago and I am not sure why I get myself this situation, but you should be able to fix this in a matter of 1/2  or less.

I was able to get around this issue by simply re-generating the root certificate and then generating a client certificate. Then exporting the full public and private key pair files to Azure portal for your private network.

After you do so you can have the portal re- the VPN client software, then you can download and install.

You can follow the Self Signed Certificate Steps on the Azure web site to generate the Root and also Client certificates.

Some Point to Note: You will have to deal with two and half certificates:

Do Not Go Down These Paths

You had a perfectly working iOS App build on XCODE 7. Now you have upgraded to XCODE 8, and when you push the build to the iTunes Connect, you get the following message back.

Dear developer,
We have discovered one or more issues with your recent delivery for "BodyMapSnap". Your delivery was successful, but you may wish to correct the following issues in your next delivery:
Missing Push Notification Entitlement - Your app includes an API for Apple's Push Notification service, but the aps-environment entitlement is missing from the app's signature. To resolve this, make sure your App ID is enabled for push notification in the Provisioning Portal. Then, sign your app with a distribution provisioning profile that includes the aps-environment entitlement. This will create the correct signature, and you can resubmit your app. See "Provisioning and Development" in the Local and Push Notification Programming Guide for more information. If your app does not use the Apple Push Notification service, no action is required. You may remove the API from future submissions to stop this warning. If you use a third-party framework, you may need to contact the developer for information on removing the API.
After you’ve corrected the issues, you can use Xcode or Application Loader to upload a new binary to iTunes Connect.
Regards,
The App Store team

You checked many times that you had the correct provisioning profile and such.

If you had a good build before then XCODE has likely broken your build.

Try these fixes first even before you go down the other line. Do not muck with your provisioning profile stuff either locally or on the developer provisioning portal or let alone generating a new set of key as they won't do anything without this fixed.

In your XCODE project find the Capabilities Tab then scroll down a bit to where it says Push notifications. It is very likely this is now in red and allows you to fix. Basically pressing the "Fix Issues" button will fix this, and that's all.

We were down so many wrong routes, that we did quite a number of bad things to the project files.
I will new provide some recovery information to get the Fix button back.

Check to make sure that

Using the editing feature of XCODE locate CODE_SIGN_ENTITLEMENTS in above file which should point to the .entitlements file. If you delete the whole line, you can get back the "Fix Issue" button under the Capabilities tab. Press that fix button again then you can Archive then Push to the iTunes connect.

The following Source Tree GIT Diffs shows you the types of files and file modifications XCODE makes after you press the Fix Issues button. 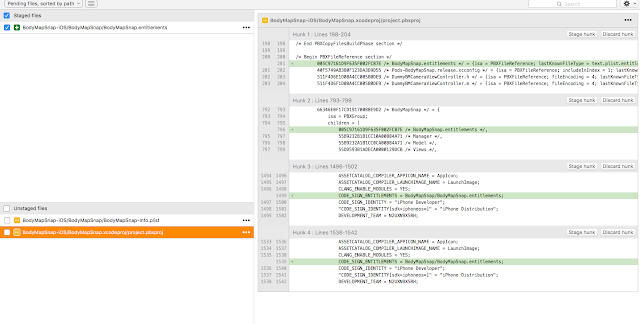 Posted by Unknown at 9:28 PM No comments:

I have been away from the MVC world for 2 years, and just started a brand new project with it today. Things have changed quite a bit from MVC4 days. Now there is no Webconfig in the base project template for Visual Studio.

After starting to learn about this change, which should be positive and there are good reasons for this change, I have found out, as usual, all the examples out there are outdated from RC times or not complete.

Here are some things I ran into that you would also run into.

If you do not do this, you will see

They are available via NuGet, Just look for Microsft.Extensins.Options and both should come up.

Where to Put My Option Plain C# Object (POCO)?

I would put that under your Models folder (create one under the root if needed), but it can be anywhere, perhaps Confgs subfolder, if you make one would just be OK too.

You Should Be Using PowerShell, Here are the Bare Minimums

I see most people avoiding PowerShell. I say if you just learn a few essential usage, it is a much easier environment to use, especially switching between MacOS and Windows.

Go to the start menu and type in . If you frequent your Windows environment, I would "pin" this to Start or the Taskbar, and also start avoiding Cmd.

If you are going back and forth between IOS and Windows, it would be a bit more comfortable to use the PowerShell as it comes "out of the box" without the need for installing the "bash" shell and many of the Unix like commands are supported as "alias". 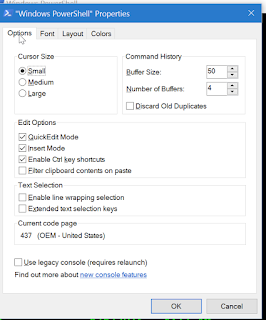 Like most anything, understanding the architecture and the basic philosophy of the design is the key to understanding whatever you are running into.

In terms of PowerShell, they tried to standardize basically on the REST type API Call style. So this is why they have commands like Get-This or Set-That.  So if you master those, then you can chain them together like you do with Unix pipes with a much more consistent "schema" they set up.

The "help" is quite extensive and comprehensive as a result, so if you type in just about any phrase you think about, as "help something", it is a good way to move forward with more stuff.

Posted by Unknown at 9:20 PM No comments:

I spent a good chunk of a day to resolve issues related to "Error Repository Not Found" or even got Permission denied (publickey) type error messages.

This issue happened suddenly on my Git environment integrated with IntelliJ Ultimate. While investigating this, I made things even worse and Git was totally denied including using SSH.

Along the way, I also tried Two Factor authentication on GitHub, and eventually got that to work both in IntelliJ and also with SourceTree.

The following sequence of events finally have fixed the issue.

If You've Tried These Already, then You Have the Same Problem as I Had.


1. Check the Windows Credentials to Remove Any Git Related

2. Last Resort: Completely Remove Your Git and  it Directly

If You Have Activated Two-Factor Authentication...

The password field you provide should not be your interactive login password, but you should generate a Personal Access Token on your GitHub account https://github.com/settings/tokens  Note that you only see the token once after you generate it, so have a Notepad ready to temporarily copy it.

Next launch your Git UI app like SourceTree and do some operation like Fetch, this should prompt you again for the password. Use the token you have just copied in the password field and let the credential to save. This will wind up in the Windows Credentials Manager so next time you change this, you would want to do Step 1 as above.

Posted by Unknown at 6:11 PM No comments:

You've just upgraded to IntelliJ 2016.2 and your existing Play Framework no longer resolves your Viewshtml* references.

Note that this is different from the Route issue which requires you to add the Source dependency from target/-2.11//main (which refers to the set of auto-generated Java sources).

I have solved this issue by going to File => Project Structure and then specifying the folder dependency to the target/-2.11/classes/views 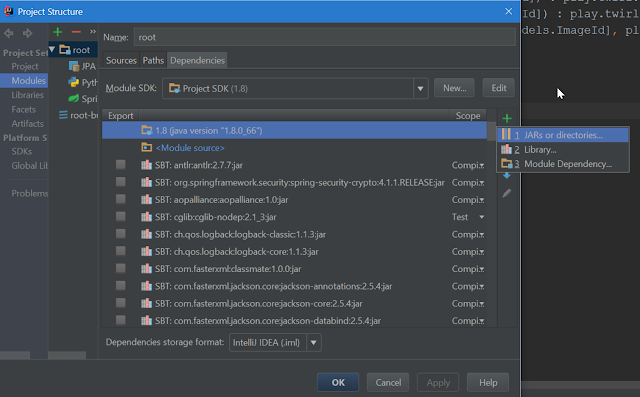 TypeScript: Avoid Using Lambda in CallBack, "this" is not Captured

You have created a class, and assigned a callback to an object implemented in Lambda expression (or have been suggested by Reshaper or IntelliJ to convert it to a lambda expression).

See the example below and what the problem is about to become much more clear.

The issue is that the Lambda captures "this" in a different way than the anonymous function (). This is actually clearly documented under the Arrow Functions section in the Mozilla MDN page.

But if you are like me it is much easier to understand by actually coding the situation.

The Explanation of The Example:

I have created a simple Main class in which a callback ")" can be externally installed after the class has been instantiated. Then by calling ), it will in turn calls the installed ). This is a fairly typical scenario, I would say.

If you are not aware of all of the implications of this, you would (and I have) thought that the class member property "s" should be accessible from within the callback in all of the scenarios.

The ones that works are;

You should treat lambda as a whole new beast of function. It appears that they tried to fix the variable notion of "this" in lambda and it only captures "this" in the line of code where it was created. What throws you off is that you've learned about "this" with anonymous functions, and assumed it works the same. Be aware of this major difference!

Posted by Unknown at 1:11 PM No comments: